The GOP: An Ball and Chain on America – A Useful Metaphor

The ball and chain weighs prisoners down so they cannot escape. A roadblock or a wall prevents something from moving forward. A weight drags something down. An albatross or a millstone connote a punishment or a heavy burden that cannot be relieved.

Certainly the GOP is  keeping us from getting back to normal by politicizing and lying about vaccines and masks. Likewise, given all the other damaging actions of the GOP over the last half century, a ball and chain is a fair and apt metaphor.

Obstruction and opposition to change has been a core Republican strategy for a half Century.Mitch McConnell has stated that his primary mission is to make Democratic Presidents and Democrats fail. And from the mission statement of the conservative National Review by Wm. F Buckley, Jr. long ago:

[The National Review] stands athwart history, yelling Stop, at a time when no one is inclined to do so, or to have much patience with those who so urge it.

The National Review (and the GOP) is still doing this today Where once this idea of the GOP stopping things was largely confined to (arguably rational) economic theory, the party has since purged its (relatively) more sensible members and given up the idea of governance. They are hell bent owning the Libs in every possible way for who knows why. Inter-party warfare is one thing, but, in or out of power, the GOP has been a ball and chain on America for nearly a half century.

This metaphor of a ball and chain, weight, restraint, prevention and blocking can and should be an overarching frame for describing the GOP’s behavior. One way to highlight the anchor that is the GOP is by “time projection” -usually statements beginning with “imagine”. Examples…

Is this negative messaging? Let’s be clear about that: negative messaging is intentional, baseless and falsely disparages a person or group. Telling an uncomfortable or inconvenient truth about the GOP may be something we are uncomfortable doing, but if it is the truth, it is not a propaganda tactic. One could make the case that we will not win conservatives over this way, but then again, the more people who see the GOP in terms of this factual frame, the more we we may attract more leaners.

I like the form of a “truth sandwich” putting our vision first, noting the GOP’s ball and chain and how it violates our values and finally returning to our moral vision. This way the focus reamins on our vision with the aside that it’s the GOP that is preventing the good things we propose from becoming reality.

Science Trek: The Art and Science of Persuasion 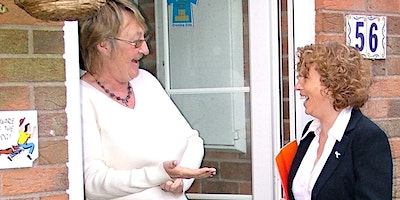 December 14, 2021, 7:00 PM - 9:00 PM
If you have thought about running for office as a Democrat, local DFL units invite you to attend candidate training for new candidates. END_OF_DOCUMENT_TOKEN_TO_BE_REPLACED
Register »
Framing in Action events are Free or pay-what-you-will.

FUDD and the Truth Sandwich